Everything Has a Story. Always.

Coincidentally, this garment was created for a photoshoot to be included as imagery in my client Adenike's book, yet the design process has its own respective tale.

Adenike came to me as a referral from fellow design friend, LaShawn (Hey, boo!). LaShawn's brand, Sun Gods, is ethereal, so check that out while you're here. Referrals from respected peers are a great way into my books, but I was also interested in doing a project for something a little unique. Designing for an event is not quite the same as designing for a photoshoot, in my mind. Cameras capture things a bit differently than the naked eye. Real life and stills provide separate experiences.

When Adenike rang my doorbell and walked in, it was a moment that I remember well. This was back when I was still in my home workspace (affectionately nicknamed 'The Dungeon') and clients had to take the stairs into the basement. I remember peeking my head around the doorway at the bottom to watch what I would describe as more of a descent. Adenike had a radiating smile and precious soft laugh that displayed from the first stair. She had a detectable energy from the beginning. (And trust me... I begin assessing clients from the beginning, before words. Hence, my unofficial tagline: 'speak sans speech.')

My intern at the time, Eliza, and I folded into Adenike's narrative pretty quickly. We learned of her family and some of her background and beliefs. I believe there were tears at one point. She had spent years penning a book on celibacy and was looking forward to its publication and release. That's what she was inquiring about a gown for. And I was excited to work with someone with such a strong story... literally.

However, as hinted at the beginning, there was additional context to her visit. She already had a gown. So... why another?

Because the first one was bad... real bad (Michael Jackson - *in my Kanye voice* if you get it). It was so bad that I still have it, bearing in mind that this commission was from 2018. I asked her if I could keep it, unsure of what I would do with it at the time, but feeling like I needed to transform it into a teaching aid of some sort. She had so little use for it despite having accrued the expense that she agreed. I feel uneasy about the idea of posting it here in its entirety, because it feels somewhat offensive, so I won't. But I will describe it with little zooms.

It was a mermaid shape, but poorly patterned. The hip curve was placed so low that a body would need an otherwordly long torso to accommodate them. The fabric was cheap... the most low-budget synthetic double knit. Paired with a cheap hobbyist (at best) lace. The skirt was created from the knit, whereas the bodice was a mixture of both.The lace did not stretch. The knit did. The lace was sewn into in a way that did not add contour needed to accommodate a bustline and I could tell without try-on that it would not fit. Also... the back of the bodice was the solid knit, with the collar and ruffle trimming using the same. However, the front panels, directly over the bust... were lace. Sheer lace. Unlined lace. See- through lace.

Designed for a book cover whose story details a decade-long journey of celibacy???

I was baffled. Beyond baffled.

To add insult to injury, the garment was poorly sewn. We're talking bad tension, holes, weird seams to camouflage holes, BLACK thread on an ALL WHITE garment, no lining, no serging, a rippling zipper...........

The most unfortunate part may be that the "seamstress" was referred by associates of hers and the maker refused accountability. They requested payment (of $400 because "that would be like a high fashion runway look") and never provided fittings or a meeting of any sort. When the final product was shipped, it arrived crammed haphazardly in packaging on a random blue plastic hanger (these little laughables always stick with me lol). Once in her possession, Adenike was never able to reach them again. Phonecalls and all communication went ignored.

OH! And it had my favorite! Y'all know it! Hot glue! Some of the lace was trimmed and added to the skirt seam. Not hand-stitched, but hot glued. It also had my runner-up favorite: velcro, which was hot glued on the back collar to make up for a section leftover from a too-short zipper.

All of this is to say: even us wee little seamstresses need some skills. Looking for custom? Try your hardest to make sure we have said skills before you invest. Because folks be frontin' HARD. The first heads up is custom w/o fittings. That's weird, especially without a valid obstacle. If someone is just dodging you, take your sanity and dip.

But then... we realized she'd marked the photoshoot date incorrectly in her calendar. I received a message saying we have only a fraction of the time to pull a look together. All the lacy, detail-heavy thoughts were scrapped and replaced with expedited elegance. Lol.

I don't believe I even sketched my new idea or if she truly saw it before she stopped by. There was no time, but there was trust. (Kudos to her for having it after her first awful experience!!) I doubt I'd still be in this game if I didn't befriend both chaos and creativity. The 3 of us combined forces once again.

My new goal was simple and clean, yet dramatic. I draped the jersey knit base with no pattern, lined it for opacity, and added some asymmetrical gathering at the neck edge. For flair, I created a coordinating sheer drape that could be threaded through the shoulder and secured under the opposite arm or left loose for interaction. whispers: design for photoshoot. Many non-model, timid spirits feel anxious as the sole subject of the lens. Having something to play with loosens bodies and nerves. (And trust that a camera will pick up tight bodies and nerves.)

After her shoot, I remember Adenike recalling when the photographer realized the drape moved: "Oh yes, take that and toss it around!" Movement also added interested to this monochromatic look (since I had to leave texture behind). That was what I imagined for this: floaty, ethereal, elegant, soft but strong... like when I first laid eyes on Adenike descending down the stairs of my 'dungeon.' 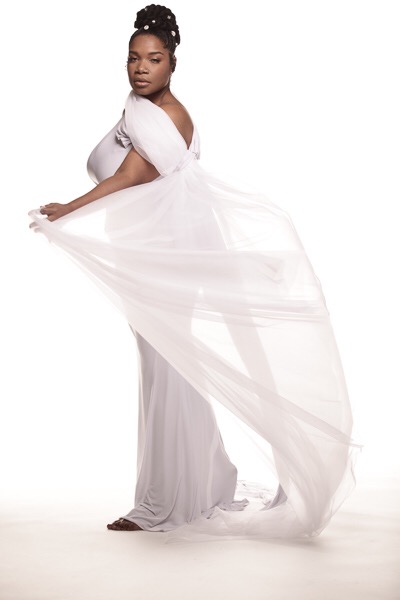 Meet Me at the Alter|ations: Erica